An estate with entertainment for everyone!

Rosendael , situated in de 19th century landscaped park was once one of the most important ducal residencies in Gelderland. Go back in time to the era of the dukes of Gelderland and get fooled by the water fountain follies!

And park Rosendael has more to offer: the shell gallery, the garden tea house folly, the suspended chain bridge and other water features that attracted local and foreign visitors alike through the ages. The castle is known for its medieval keep. The round tower is the largest of its kind that has been preserved in the Netherlands. The castle and the park can both be visited.

For daily activities, please enquire at the reception. Rosendael also has a gift shop and an orangery offering drinks, snacks and lunch. Rosendael Castle can be visited on a guided tour, starting several times a day. In addition, you can explore the park at your own pace. English tours can be given upon request. 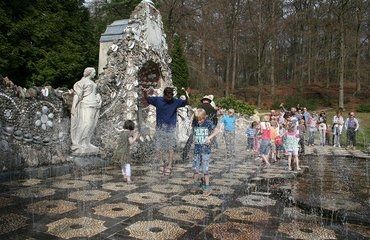 How to get there

Castle Rosendael can be easily reached by car via the A12, exit 26 (Arnhem Noord) and via the A50, exit 20 (Arnhem Centrum). Please check your public transport options on www.9292.nl